*Mexikaresistance.com Note: Educate yourself before trusting your health to unproven "medicine."

One of the major themes of this blog has been to combat what I, borrowing a term coined (as far as I can tell) by Dr. R. W. Donnell, like to refer to as “quackademic medicine.” Quackademic medicine is a lovely term designed to summarize everything that is wrong with the increasing embrace of so-called “complementary and alternative medicine” (CAM) or, as it’s increasingly called now, “integrative medicine” (IM) into academic medical centers. CAM/IM now a required part of the curriculum in many medical schools, and increasingly medical schools and academic medical centers seem to be setting up IM centers and divisions and departments. Fueled by government sources, such as the National Center for Complementary and Alternative Medicine (NCCAM) and private sources, such as the Bravewell Collaborative (which has been covered extensively recently not just by me but by Kimball Atwood, Steve Novella, and Mark Crislip), academic medical centers are increasingly “normalizing” what was once rightly considered quackery, hence the term “quackademic medicine.” The result over the last 20 years has been dramatic, so much so that even bastions of what were once completely hard-core in their insistence on basing medicine in science can embrace naturopathy, Rudolf Steiner’s anthroposophic medicine, reiki and other forms of “energy healing,” traditional Chinese medicine, and even homeopathy, all apparently in a quest to keep the customer satisfied.

Of course, in a way, academia is rather late to the party. CAM has been showing up in clinics, shops, and malls for quite a while now. For example, when I recently traveled to Scottsdale to attend the annual meeting of the American Society of Breast Surgeons, I happened to stop in a mall looking for a quick meal at a food court and saw this:

Basically, it’s a massage and reflexology stand. I’ve seen its like popping up in many malls throughout the country. Some go beyond a stand in the middle of the mall and actually have a storefront in the mall. More recently, unfortunately, I been noting similar stands selling various forms of woo in malls, but with a difference. For example, last year over the Christmas holidays, we visited friends in Cleveland and, while doing a little shopping at Beachwood Place, we noticed this: 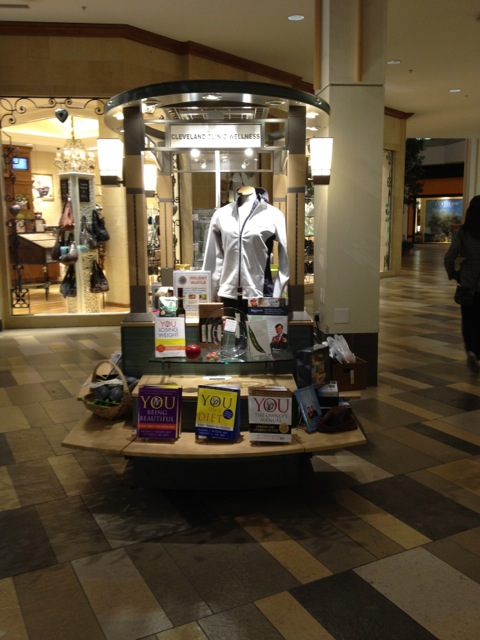 Yes, it’s the Cleveland Clinic’s “Wellness” Institute, which offers acupuncture, “holistic psychotherapy” (whatever that is), reiki, chiropractic, and many other CAM modalities. (Look upon the CCF’s reiki page and weep at the spiritualistic mumbo-jumbo that is used to justify using reiki.) Then, just last week, a Facebook friend posted this on my wall:

Yes, it’s the Mayo Clinic providing its CAM services in the Mall of America. If you take a look at Mayo’s CAM program, you’ll see that it offers a lot of the same things that the Cleveland Clinic offers, including supplements and botanicals, acupuncture, traditional Chinese medicine, Ayurvedic medicine, hypnosis, and meditation.

One of the more insidious consequences of the infiltration of pseudoscience into academia in the form of quackademic medicine is that it gives the imprimatur of science to modalities that can best be described as pseudoscience. When people start seeing highly respected names in academic medicine, institutions generally viewed as the leaders in advancing the frontiers of medicine, such as the Mayo Clinic and the Cleveland Clinic selling acupuncture and reiki in malls, what are they supposed to think? Most of them, trusting in these hallowed names, will conclude that this stuff must be OK. It must be scientific. It must work. After all, would the Mayo Clinic and the Cleveland Clinic put their names on services offering these modalities if they didn’t work? Would they be selling them in stands and shops in malls if they didn’t work?

Alas, regular readers know the true answers to those questions (“yes” and “why not?”), but few others do. Quite reasonably, the average consumer might conclude that this stuff is actually medicine rather than quackery. In fact, even non-academic community hospitals, which previously hadn’t offered much in the way of CAM services, might conclude that they should get in on the act. And they are. Let me tell you the story of one example that is, unfortunately, right here in my own state. It’s a disturbing little tale, particularly given that the vast majority of health care is delivered by private physicians, the vast majority of whom have their admitting privileges not at huge academic medical center conglomerates like the Cleveland Clinic and the Mayo Clinic, but rather at hospitals like Oaklawn Hospital in Battle Creek, MI.