With one eye on the countdown to election day and another on President Obama’s deportation schedule, undocumented immigrant activists are gathering themselves for a standoff this week with Obama over his deportation record, and demanding he order a halt to the deportations of those who would be eligible for the federal DREAM Act. The move comes just as Obama is attempting to shore up his Latino support ahead of the November elections, a crucial part to his re-election strategy.

Activists have pledged to follow up a weeklong sit-in in Obama’s Denver campaign offices with a rolling schedule of similar actions in states over the next few weeks. Veronica Gomez and Javier Hernandez, undocumented immigrant activists with the National Immigrant Youth Alliance, left Obama’s Denver campaign office on Monday after staging a six-day hunger strike while camped inside the Obama for America offices.

“Undocumented youth will be escalating in other actions. They are going to be arrested in some states, that’s what youth decided to do. The message is: we want an executive order,” said Hernandez. 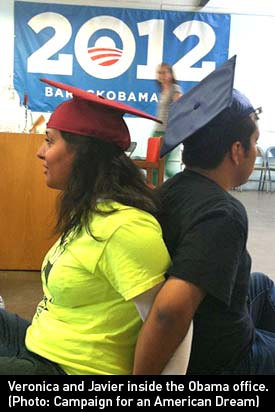 The actions come days after the Department of Homeland Security announced that just 4,363 deportation cases has been closed after a national review of the nearly 300,000 people in removal proceedings. The initiative was Obama’s attempt to show that his administration would make good on its stated enforcement agenda by combing through the cases of people facing deportation, and removing those who were not a high priority to kick out of the country. People who save for their immigration violations had been convicted of no crime, who had longstanding ties to the country or were young and educated, were supposed to good candidates to win a short-term reprieve. Immigrant rights activists have been disappointed by the results. And through it all, immigrant rights networks bubble daily with reports of yet another father, or sister, or fresh high school graduate, who’s facing imminent deportation.

“I think all of us were really excited to see how the Administration’s prosecutorial discretion policy would roll out, but over the last year, all we’ve seen are families divided and DREAMers deported,” Gaby Pacheco, coordinator of United We Dream’s Education Not Deportation project, said in a statement.

Indeed, over the course of the initiative, the rate of those whose cases were eligible for administrative closure slowed. The deportation review had itself been announced after activists pressed Obama last year to make sure his immigration record would include more than just the honor of having deported more people than any other president had since records have been kept on the matter.

It’s against this backdrop that activists have ratcheted up their calls. “The President has clear legal authority to give our community relief, yet he continues to say he doesn’t have the power,” said Pacheco. “Rest assured, we will … take our voices to the White House and to his campaign offices until we see Obama exercise leadership.”