Canada is on the frontlines of a new battle in the rainforests of Mesoamerica, and billions of dollars worth of precious metals are at stake.

As the developing countries in Latin America turn to the mining industry to secure their economic futures, Canadian mining companies are eager to expand their claims. Already, they hold about 1,400 mining properties from Mexico to Argentina, bringing to mind for some Latinos images of an old enemy, the Spanish Conquistadors. 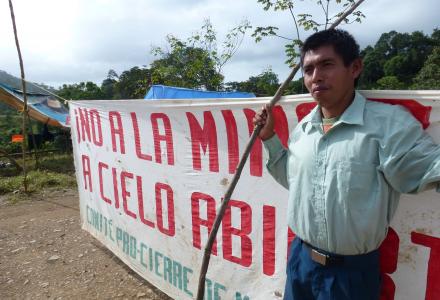 One of these properties is in the Colon province of Panama, where a number of indigenous peoples and peasant farmers, backed by a national consortium of environmental groups are trying to stop two Canadian mining companies from developing a gold mine and one of the last known major copper reserves in the world. They are concerned these mines would strip thousands of hectares of rain forest, deplete and contaminate water supplies, and displace the communities that have made the area their home for centuries, including the Ngobe people, Panama’s largest indigenous group.

The mining companies say they have had extensive consultations with locals and there is widespread support for their projects. In addition, they say they are bringing economic development, jobs, and growth to these communities.

The local communities are drawing inspiration from similar fights that took place in Costa Rica, where public pressure led to a ban on open pit mining, and El Salvador, where indigenous people secured a moratorium on mining in part of the country. Both are considered victories against the “Canadian Conquistador,” but have come at a great cost – lives were lost, and considerable damage to the environment had already taken place.