*Mexikaresistance.com Note: Rush Limbaugh's legion of dittohead callers? Fake. The right wing is masterful at manipulating the media and sowing seeds of doubt. And the american public eats it all up.

One of the common refrains in the media world is that Rush Limbaugh has the largest audience in talk radio. He is eager to capitalize on this, multiple times per episode in fact. But how true is this claim?

Limbaugh is one of several radio hosts syndicated through Premiere Radio Networks, including right-wing darlings such as Sean Hannity and Glenn Beck as well as known liberal voices such as Randi Rhodes and the Reverend Jesse Jackson. One of the features for Premiere syndicated shows is a service Premiere On Call, a phone banking service for voice talent. What this means is, they hire people to call in. If you ever listened to one of the shows distributed by Premiere, you may find yourself impressed at how a caller would bring up a subject which then the host would have a perfect response to, like a perfect pitch in a baseball game to allow the home run hit. Premiere On Call’s hiring standards appear to be focused on hiring people able to generate accents, vocal inflections, or other ways to enable re-use of the same voice actor multiple times without being identified as such. 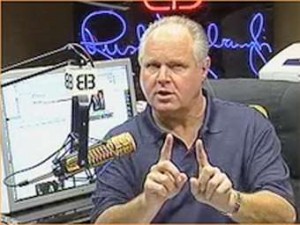 Limbaugh obtained the largest audience during an era when audience count was made by manually filled out diaries, a practice which has been slowly phased out over the past few years, as detailed electronic tracking became available. Once the detailed tracking was available, Rush’s ratings dropped significantly, by over a third. With an estimated weekly audience of 15 million users now, that comes to an average of less than 3,000 listeners per station, not very good ratings at all. For comparison, left-wing giant Ed Schultz on Jones Radio Network sports an estimated 8,000 listeners per station. To get these numbers, we took the totals given from Talkers Magazine and cross-referenced with the number of stations that carry each show. Rush is carried on over 10x as many stations as Big Eddie. Even though Rush’s overall listenership is high, the number per station is low.