The indigenous community of Arroio Korá in the state of Mato Grosso do Sul, central-western Brazil, was attacked by gunmen who attempted to remove them from their ancestral lands. One indigenous member of the community is missing, feared to have been killed. There is a risk of further violence.

According to the community, on August 10, about 50 armed men surrounded the encampment that brought together 400 people, in the municipality of Paranhos, on the border with Paraguay. For several hours the gunmen opened fire, shouted threats and burned crops, and community members fled into the nearby forest. One of the indigenous persons, Eduardo Pires, disappeared during the attack; the community said he was taken by the gunmen and fears that he has been murdered. The next day Geni Centurião, a two year old girl, died. The cause of death has not yet been officially established, but the community says the child fell ill during the attack and that it was impossible to feed her. 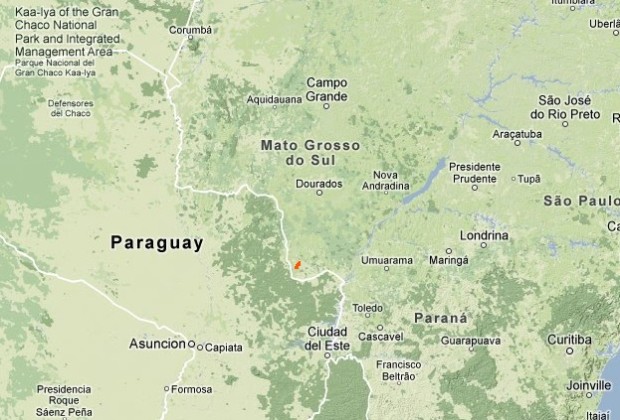 The Federal Police were at the scene shortly after the attack, but the community complained that the authorities have not given due attention to the disappearance of Eduardo Pires, and that they are in urgent need of permanent protection. The Federal Public Ministry asked the Federal Police to initiate an inquiry into the attack. According to the NGO the Indigenous Missionary Council (CIMI), there is a serious threat of new attacks against the community. Several indigenous communities have been attacked under similar circumstances in the municipality of Paranhos in recent years.

The land Arroio Korá was confirmed by President Luiz Inacio Lula da Silva on December 21, 2009. Nevertheless, one week later the Supreme Court suspended the recognition of a small section of the lands (184 of 7,176 hectares). While the farmers have used this decision to continue occupying the entire expanse of the lands, the indigenous peoples of Arroio Korá staged the reoccupation of their ancestral lands that do not include the disputed area.

Please write immediately in Portuguese or your own language:

Requesting that the authorities conduct an independent and full investigation into the attack on the community of Arroio Korá on August 10, including the disappearance of Eduardo Pires and death of Geni Centurião, and bring those responsible to justice.

Urging them to provide security for the community of Arroio Korá according to the desire of those affected;

Requesting the compliance with their obligations under Convention 169 of the International Labour Organization, the United Nations Declaration on the Rights of Indigenous Peoples and the Brazilian Constitution of 1988, and completion of the process of official recognition of the Arroio Korá ancestral lands.

Secretary of Human Rights of the Presidency of the Republic