A dark plume leapt into the sky over southern Mexico. Below, waves of hot gas and rock screamed down volcanic slopes, stripping the mountain and surrounding area of vegetation, killing any living thing in their path. It mixed with rivers to create torrents of water, mud and other material as thick as wet concrete. For days afterward the air was choked with ash—microscopic shards of glass—that sickened survivors who inhaled it. It fell like snow onto the surrounding landscape, jamming rivers to create massive floods that wreaked havoc on agriculture. It was A.D. 540, and El Chichón—a small and previously unremarkable volcano—had plunged Maya civilization into darkness and chaos. 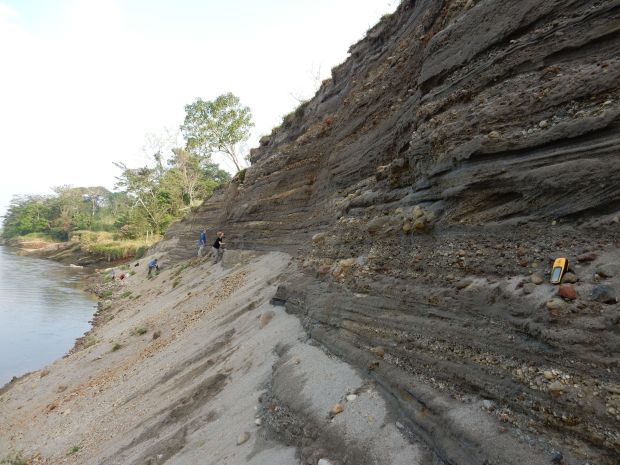 8m thick deposits along the Platanar river from the 1982 eruption. Credit: Kees Nooren

At least that is the story according to a new paper published in the February Geology, jumping into the long-running archaeological debate about what drove Maya civilization—one of the most sophisticated of its time—into a century-long “dark age.”

The Maya, who thrived from A.D. 250 to 900, are widely considered the most advanced civilization in the pre-Columbian Americas. They developed a writing system, precise calendars, new mathematics and magnificent cities with pyramids that still cast their shadows today. But a major mystery remains. In 1938 an archaeologist noticed a strange gap in dated Maya monuments. For more than 100 years the Maya inexplicably halted construction projects, seemingly deserted some areas and engaged in warfare. And in the 75 years since the discovery archaeologists have failed to find an explanation—although they have come up with a lot of hypotheses. Some have speculated an earthquake or hurricane struck the area. Others think trade routes might have collapsed.

An early hint that an ancient volcanic eruption might be the culprit came far from the Maya lowlands, in Greenland and Antarctica. A volcano can send a large amount of sulfur particles rocketing into the stratosphere, where they can easily spread across the globe. Once they reach the area over the poles they fasten to snow crystals and eventually become trapped in the ice sheets below, leaving a precise record for scientists to uncover centuries later. That is how Michael Sigl, a chemist from the Paul Scherrer Institute in Switzerland, deduced that a massive eruption must have happened somewhere in the world in A.D. 540—right at the start of the mysterious Maya “dark age.” Tree ring records indicate that sunlight-reflecting sulfur particles high in the atmosphere caused the global temperature to plummet by 1.5 to 2 degrees Celsius at the same time. A volcanic eruption had clearly rocked the world. But could scientists pinpoint its location?

ENTIRE ARTICLE HERE: Volcanic Eruption May Have Plunged the Maya into a “Dark Age” – Scientific American