The manufacturing of consent is endemic within modern societies. Throughout history, the need to "persuade and influence" has always been manipulated by those people in power as a means to maintain authority and legitimacy. In more recent years, the overall manipulation of the mass public mind has become less about making speeches and more about becoming a pervasive presence within the lives of each of individual.

Edward Bernays has often been called “the father of public relations,” as it was his teachings and research that spurred the postwar years of propaganda. Bernays, a nephew of Sigmund Freud, utilized psychological and psychoanalytical ideas to construct an informational system – propaganda – capable of manipulating public opinion. Bernays, apparently, considered that such a manipulative apparatus was necessary because society, in his regard, was composed of too many irrational elements – the people – which could be dangerous to the efficient mechanisms of power (or so-called “democracy”). Bernays wrote that, “The conscious and intelligent manipulation of the organized habits and opinions of the masses is an important element in democratic society.”[1] Bearing in mind that Bernays was working in the early 1920s, we can expect the mechanisms of propaganda – mass manipulation – to have progressed to a very advanced degree since then. Within the context of our modern mass societies, propaganda has morphed into a mechanism for not only engineering public opinion, but also for consolidating social control. 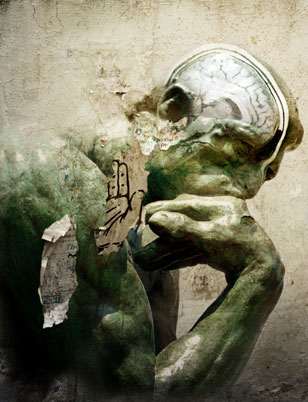 Modern programs of social influence could not exist without the mass media. Today it exists as a combination of expertise and knowledge from technology, sociology, social behaviorism, psychology, communications and other scientific techniques. Almost every nation needs a controlled mainstream media if it is to regulate and influence its citizenry. By way of the mainstream media, a controlling authority is able to exert psychological influence upon people’s perception of reality. This capacity works hand in hand with the more physical components, such as enforcing the legal system and national security laws (surveillance and monitoring). State control, acting as a “psychological machine,” instigates specific psychological manipulations in order to achieve desired goals within its national borders (and often beyond). Examples of these psychological manipulations include the deliberate use of specific cultural symbols and embedded signifiers that catalyze conditioned reflexes in the populace. These triggers have included the words “red” and “communist” during the United States’ 1950s McCarthyism, and “Muslim terrorist” during the currently constructed war on terror. Targeted reactions can thus be achieved, making the populace open to further manipulation in this state. This is a process of psychic re-formation that works repeatedly to soften up the people through continued and extensive exposure to particular stimuli. These are the symbols, artificial and human-made, that we live by in order to allow for the construction of a compliant society.

FULL ARTICLE HERE: Messing With Our Minds: The Ever Finer Line Between News and Advertising.