Writing books and writing blogs are similar. They should be truthful. If they were not the author loses credibility and his/her ability to convince suffers. This is how it should be. But Arizona is testing this rule of thumb. 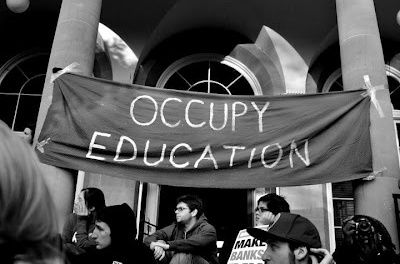 The assault on the truth in Arizona makes it impossible for those seeking the truth to get traction, and like Sisyphus; they fall into a rut with the boulder rolling back on them, at every turn.

Because of the apparent futility and ability to communicate, people become dispirited. Those who continue to fight have to resort to hyperbole to get their message across. They become so desperate that they want to emotionally shake up people to get their attention.

A hyperbole is defined as an exaggeration of fact, but in my experience this not necessarily true. The speaker just wants to wake up people.

Hyperbole was used in the 1960s before the anti-war demonstrations when students were told that they were exaggerating the truth. When people finally woke up thousands of Americans, and hundreds of thousands of Vietnamese were dead.

The truth be told, a motivated student mass stopped the use of nuclear weapons and the bombing of innocent civilians. At home changes were brought about by politicized students, which made possible the enrollment minorities into all white student campuses.

Students were interested in a more just society, and they were attracted to groups that had a social purpose. Consequently, the number of fraternities and sororities fell drastically on college campuses.

One of the roles of students was to act as champions of the underdog and confront tyranny. Because of this, Latin American students were targeted by dictators.

The United States does not have a tradition of student activism. And recent in times campus activism has become an endangered species.

It is difficult to build mass movements on campuses when public colleges and universities have been privatized, and tuition at four-year public institutions run close to $10,000 a year.

My reaction to this apathy has passed through stages, beginning with frustration and then turning into anger. The Arizona experience has lessened my patience.

The Arizona reality is that corporations have taken over state and local governments and most elected officials have capitulated to corporate interests. It is not hyperbole when I say that Arizona has become a fascist state where “[a]ll pretenses of democracy are flung to the winds.” In Germany it began with the suppression of labor and then teachers; in Arizona these sectors have been reduced to a whimper.

In times like these I have found myself trying too hard, and becoming a motivational speaker instead of a teacher, relying on what some may call hyperboles to make my point. But, is it a case of exaggeration? In a democratic society this something we cannot answer unless we are allowed to test the facts, which is impossible in Arizona.

As an educator I am always searching for reasons why students are so apathetic. The other day I was at an event at Tia Chuchas, a community center in Sylmar, California, where I appeared with Luis Rodríguez, an internationally known novelist. Luis and his wife Trini founded and fund Tia Chuchas.

ENTIRE ARTICLE HERE: Acuña: The answer is blowing in the wind | mexmigration: History and Politics of Mexican Immigration.