JUST over a week ago, a handful of Senator Scott P. Brown’s supporters gathered in Boston to protest his opponent, Elizabeth Warren. The crowd — making Indian war whoops and tomahawk chops — was ridiculing what Mr. Brown, Republican of Massachusetts, called the “offense” of Ms. Warren’s claim that she has Cherokee and Delaware ancestry. 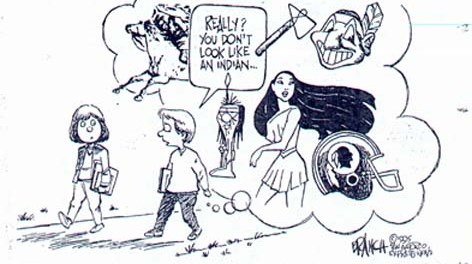 To mock real Indians by chanting like Hollywood Indians in order to protest someone you claim is not Indian at all gets very confusing. Even more so because early Americans spent centuries killing Indians, and then decades trying to drive any distinctive Indianness out of the ones who survived. Perhaps we’ve come a long way if Americans are now going around accusing people who don’t look or act Indian enough of appropriating that identity for personal gain. But in fact, the appropriation of Indian virtues is one of the country’s oldest traditions.

Indians — who we are and what we mean — have always been part of how America defined itself. Indians on the East Coast were largely (but never completely) deracinated, and tribes like the Delaware were either killed or relocated farther west. At the same time, their Indianness was extracted as a set of virtues: honor, stoicism, dignity, freedom. Once, in college, an African-American student shook his head when I told him that I was Indian and he said he was jealous. Why? I asked. Because you lived life on your own terms and would rather have died than become a slave. That sentiment — totally at odds with the reality in which many tribes were indeed enslaved and a few owned slaves themselves — seemed a very wistful expression of what being an Indian meant.

In any case, the mythic Indian virtues of dignity and freedom adhere less to real Indians than they do to the very nation that deposed them. Just think of how much the ultimate American, the cowboy, has in common with the Indian: a life lived beyond the law but in accordance with a higher set of laws like self-sufficiency, honor, toughness, a painful past, a fondness for whiskey and always that long, lingering look over his shoulder at a way of life quickly disappearing. Contrary to the view held by a lot of Indian people, America hasn’t forgotten us. It has always been obsessed with us and has appropriated, without recourse to reality or our own input, the qualities with which we are associated.

BEGINNING in the late 19th century, assimilation of the remaining American Indian population was official federal policy. This was around the time that the American frontier was considered closed: the West Coast had been reached and there were no more lands or peoples to conquer. And yet Indians still held on to much of our land and our identity. So at the behest of the federal government, thousands of Indian children were removed from their homes and sent to boarding schools. Indian languages and native religions were suppressed.

Even as late as the 1950s, the federal government ran a relocation program that promised American Indians housing and job training if they left their rural communities for cities like Cleveland, Chicago and Los Angeles. (Very few of these programs provided anything close to what the brochures handed out door to door on many reservations had promised.)

ENTIRE ARTICLE HERE: Kill the Indians, Then Copy Them – NYTimes.com.

3 Comments on Kill the Indians, Then Copy Them – NYTimes.com