Shall we play? If I say Arizona, how do you respond? What's the first thing that comes to your mind? 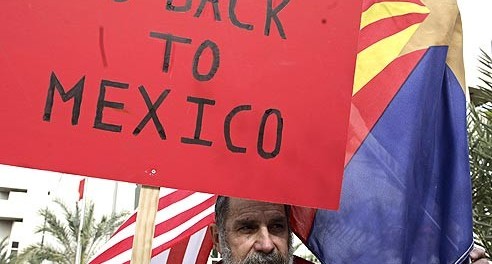 All good answers. However another one comes to mind, particularly if one is thinking post 9/11: collateral damage.

The date 9/11/2001 will forever be associated with terrorism. It will also be remembered when this country became hyper-vigilant about its borders and also began a clampdown on civil and human rights, particularly against people of Arab descent and peoples of the Muslim faith.

One can also look at the Mexican population in the United States as “collateral damage.” This of course includes people from Central America and South America and the Caribbean. Not all of them, just the ones that look “Mexican.”

If that sounds like a stereotype, it is and that’s the point. That’s what racial profiling is and in the case of the Mexican, the racial profile is Indigenous.

However, it is illogical that the targeting of Mexicans would somehow be related to 9/11. The reason is that the suspected terrorists had nothing to do with Mexico or the US-Mexico border.

In that sense, Mexicans are not really collateral damage. Mexicans have been targets for generations, even centuries. The United States from its very inception coveted Mexican land. And Mexican bodies have been cheap labor (and dehumanized) in this country for well over a century.

That’s a lot of ancient history, but let me cut to the chase: when I say Arizona, how about: “Indian Removal?”

This is not an academic debate over the meaning of Indian removal. Rather, it is the reality on the ground. Not just in Arizona, not just in the borderlands, but rather throughout this entire country. And this is not just a recent occurrence; it goes back long before 9/11, long before my own memory. Since I can remember, Mexicans have always been targeted for removal.

More currently, as a result of the 9th Circuit Court of Appeals ruling last month, the racial profiling SB 1070 legislation is now in effect in Arizona. The court has permitted section 2B of this unprecedented legislation to go into effect, with the caveat that people should be on the lookout for the violation of peoples’ human rights. This is a throwback to the Jim Crow era. It appears that the courts do not understand how racial profiling works. It is illegal and has always been illegal, at least in modern history. And yet it is as real and as predictable as the sunrise or more aptly, the sunset.