If you believe that poverty is the domain of the comfortably poor, black, unemployed, unmotivated and uneducated among us, you have been sadly misled. Prepare to be astonished by numbers that tell a very different story. 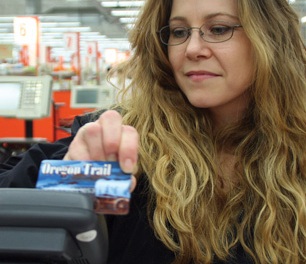 You’re in the grocery store checkout aisle. Time to cash out. You pull out your food-stamp EBT card. You’re overcome with a sense shame one feels for being broke in a world that measures self-worth according to net-worth.

You hide the card behind your bank debit card – the one that has nearly nothing in it – and try to act natural as you slide it through the machine. “Cash or Food,” it asks. You hit food. No one in the aisle with you is the wiser. But the cashier knows. You wonder if he’s now scrutinizing your food purchases. If he’s so poor how can he afford organic tomatoes? (After all, pesticides only harm the wealthy!) But at least the people behind you aren’t in on it.

“OK, the balance is $10.99,” the cashier says. You forgot about the laundry detergent. Now you’ve been outed to everyone. “He’s buying this stuff with our money,” you imagine people around you thinking.

People who feel the shame-inducing scrutiny of many judgmental Americans aren’t paranoid. When the subject of welfare is brought up in my classrooms, many students immediately talk about people they see cheating the system. Whether the people they have in mind really are cheating the system or not, poor people are routinely conceptually linked with those of the lowest common denominator: lazy, stupid, cheats.

Negative assertions about the poor are in part a product of the American bootstrap myth: Anyone who works hard enough in America will have a great life. And if you don’t have a great life, then you lack the will, integrity or intelligence to succeed. These kinds of concepts are what the late Australian philosopher Val Plumwood called “conceptual weapons.” They work together to structure a system of thought that distorts, oversimplifies and ultimately fosters ignorance about, and shame amongst, oppressed groups of people.