A picture of Chief Little Crow was plastered across the first page of a PowerPoint presentation that 13-year-old Brandon Spencer was assembling at White Swan High School one recent morning. “He’s part of a Sioux tribe and I’m part of a Sioux tribe,” the eighth-grader and Yakama tribal member said about the chief who led the Mdewakanton Dakota Sioux in the mid-1800s.

Sitting next to Spencer was 14-year-old Darnell Williams, also an eighth-grader. He was working on a presentation about Sitting Bull, once chief of the Hunkpapa Lakota Sioux. 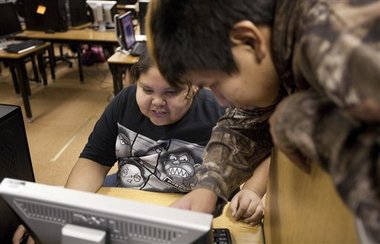 Both Spencer and Darnell are taking a recently implemented tribal sovereignty class in the Mt. Adams School District.

“I like this class because I can learn more about my culture, my tribe and other tribes,” Spencer said.

Adopted by the state Office of the Superintendent of Public Instruction, the tribal sovereignty curriculum that covers the history, culture and governments of tribes across the country with an emphasis on Washington tribes is available to school districts across the state. The curriculum can be used in elementary, middle and high schools, and to satisfy social studies credit requirements. Education plans in the curriculum can be modified to fit each school district and corresponding tribe.

The curriculum is open to all students and is not only designed to teach members of the state’s 29 federally recognized tribes about their own history, government and culture, but also to educate non-Native Americans about tribal communities.

The online curriculum is the result of a bill signed into law by Gov. Chris Gregoire in 2005 that encourages school districts on or near tribal reservations to incorporate tribal studies. Bill sponsor Rep. John McCoy, D-Tulalip and a Tulalip tribal member, said the absence of Native American studies in public schools left a gaping hole in history classes and caused a disconnect between schools and Native Americans.

For the past seven years, tribes across the state — including the Yakama — have been working with educators in their respective school districts to develop the curriculum, which can be found at http://www.indian-ed.org. Also covered in the curriculum are the treaties Northwestern tribes signed with the U.S. government, and how their traditional hunting, fishing and food gathering rights in their original territories were reserved.

The new curriculum also has drawn the interest of Heritage University in Toppenish, which plans to incorporate it into the college’s indigenous studies program next year, said Winona Wynn, head of university’s English and humanities department. She will head the indigenous program next year.

“We want to retain and respond to our native students and we want them to feel a sense of belonging at our university,” she said.