On January 5 in El Potrero, a small town in the Mexican state of Guerrero, a man named Eusebio García Alvarado was kidnapped by a local criminal syndicate. Kidnappings are fairly common in Guerrero—the state, just south of Mexico City, is one of the poorest in the country and the site of some of the worst violence in the ongoing battle between the drug cartels and Mexican authorities. Guerrero’s largest city, Acapulco, is known to Americans as a tourist hot spot. It’s also currently the second most dangerous city in the world, according to a study released by a Mexican think tank in February. 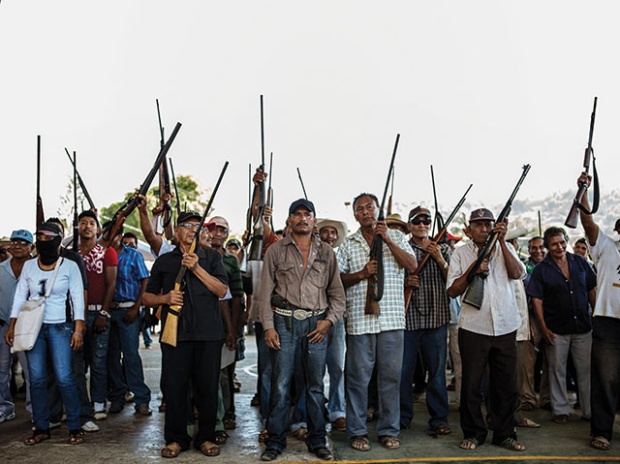 Eusebio’s kidnapping, though, was exceptional. He served as the town commissioner of Rancho Nuevo and was a member of the community activist organization Union of Towns and Organizations of the State of Guerrero (UPOEG), and the brazenness the criminals showed in snatching him up pissed off his neighbors so much that they took matters into their own hands.

The day after Eusebio was abducted, hundreds of people from the nearby towns of Ayutla de los Libres and Tecoanapa decided that they could do a better job policing their communities than the local authorities. They grabbed whatever weapons they had—mostly hunting rifles and shotguns—set up checkpoints at entrances to their villages, and patrolled the roads in pickup trucks, often hiding their faces with ski masks and bandanas. Overnight, UPOEG transformed from an organization of advocates for better roads and infrastructure into a group of armed vigilantes operating without the endorsement of any branch of the government. The kidnappers released Eusebio that day, but UPOEG’s checkpoints and patrols didn’t disappear with his return. In fact, there was a groundswell of support. Five municipalities in the surrounding Costa Chica region followed suit and established their own militias. Soon, armed and masked citizens ensured that travelers and strangers weren’t allowed to enter any of their towns uninvited. 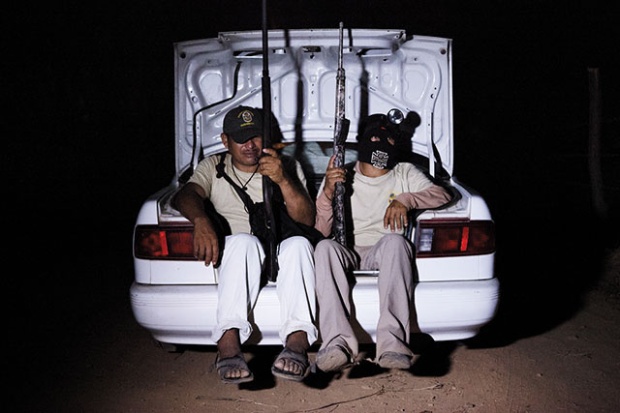 These militias captured 54 people whom they alleged to be involved in organized crime (including two minors and four women), imprisoning them inside a house that became an improvised jail. On January 31, the communities gathered on an outdoor basketball court in the village of El Meson to publicly try their detainees. The charges ran the gamut from kidnapping, extortion, drug trafficking, and homicide to smoking weed. More than 500 people attended, and the trial was covered by media outlets all over the world.

This uprising of the citizenry complicated relations with the authorities who were assigned to govern and police these villages. Initially, the state’s governor, Ángel Aguirre, praised the militias and even said that the law gave villagers the right to rule themselves. However, his position shifted quickly thereafter, and he publicly declared that no one had the right to take justice into their own hands. Following intense negotiations between UPOEG and the government, the prisoners were surrendered to the state police in February. But the villagers had no intentions of handing over their guns.

Federal and Guerrero state laws give indigenous groups some authority to govern themselves, and the militias are mostly composed of indigenous people, so there’s legal precedent for what’s happening in Costa Chica. Francisco Lopez Bárcenas, a renowned lawyer who’s a member of Oaxaca’s indigenous Mixteco people and has documented these sorts of rebellions in Mexico for decades, told us that while these communities have policed themselves for centuries, the “self-defense groups” that have formed in Guerrero and elsewhere are a different beast.

“The community police are groups that are part of the inherent structure of the towns and villages, and are legitimized by the rights of indigenous people,” Francisco said. “The self-defense groups are formed by the groups’ own initiative to defend the people, but they are not part of the towns’ social structures, so they aren’t truly accountable to the communities. That’s why they don’t have the same legitimacy. Also, self-defense groups don’t necessarily have be a part of indigenous communities—they could be farmers, or [they could form] in the cities, wherever a particular group feels threatened.”