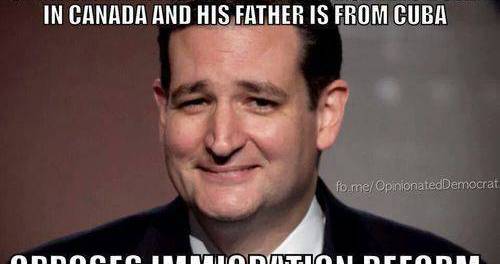 After Congress approved, and President Obama subsequently signed, a deal to reopen the federal government last week, Congress must look forward and act on other issues facing the country. Shortly before the government shutdown’s end, President Obama told Univision that he will push to make immigration reform a top priority and push Congress to act. For this to occur, the President and those in Congress hoping to pass meaningful immigration reform will have to stand up to many of their colleagues who were the face of the most recent government obstructionism. 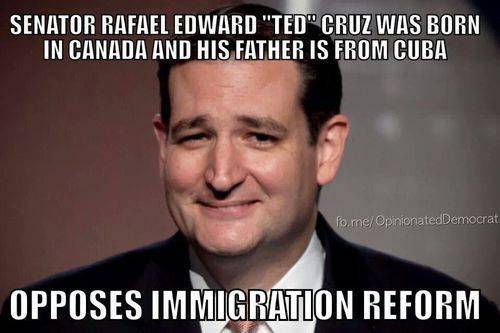 Of those in Congress responsible for the recent shutdown, Sen. Ted Cruz is undoubtedly the most prominent. After Cruz’s 21-plus hour speech, the Texas Republican rose to unprecedented heights within far-Right circles. Cruz’s antics further emboldened a bloc of fringe House Republicans that have seemingly taken hold of the GOP caucus and become the driving force behind obstruction in Congress’ lower chamber. Unsurprisingly, many of those House Republicans also serve in the vehemently anti-immigrant House Immigration Reform Caucus who have frequently voiced their opposition to immigration reform legislation throughout the year.

The onus on passing immigration reform legislation has lied with the House since the Senate passed The Border Security, Economic Opportunity, and Immigration Modernization Act of 2013 (S.744) in June. However, it is worth remembering that Cruz worked alongside anti-immigrant Sens. Jeff Sessions (R-AL), Chuck Grassley (R-IA), and others to lead opposition to the bill while it was being considered in the Senate Judiciary Committee, filing countless amendments with the intent of derailing the bill. These efforts continued until S. 744 was eventually passed by the full Senate in a 68-32 vote.

Outside of the Capitol’s halls and office buildings, Cruz has maintained ties to many of those within the organized anti-immigrant movement and far-Right organizations like the Heritage Foundation that actively oppose immigration reforms. During and shortly after debate over S. 744 occurred in the Senate, Cruz participated in a national conference call organized by NumbersUSA and spoke at the Black American Leadership Alliance’s “DC March for Jobs.”

Ted Cruz is no stranger to government obstructionism and maintains myriad allies among the far-Right fringe. His work this month to inspire the government shutdown is simply a culmination of his efforts since assuming elected office in January. He has recently revealed that he has no intent to halt these tactics either.

Given how lucrative the past few months have been for Cruz, it is no wonder he is showing no signs of stopping. The Atlantic notes that Cruz and his related political action committees raised over one million dollars in the last quarter. Cruz also raised significant political capital among many on the far-Right as evidenced by his overwhelming victory in the presidential straw poll at this month’s Values Voter Summit.

While Cruz will likely focus his future efforts on dismantling the Affordable Care Act, he has made his opposition to immigration reform legislation well-known previously and his opinions have certainly not changed.

As Congress moves past the recent shutdown, it must address immigration. The overwhelming support for reform must not be derailed by nativists in the House. Anti-immigrant legislators further inspired by Ted Cruz’s obsession with obstructionism should heed the words of their colleague, Rep. Peter King of New York (who, in his own right, is no stranger to targeting and demonizing minority communities): “I mean, you’re wasting my time and I’m wasting your time talking about him. No one even cared about Ted Cruz a few months ago. But he has sold a false bill of goods. He’s a false prophet.”