Growing up in a well-heeled suburban community, I absorbed our society\’s distaste for dissent long before I was old enough to grasp just what was being dismissed. My understanding of so many people and concepts was tainted by this environment and the education that went with it: Che Guevara and the Black Panthers and Oscar Wilde and Noam Chomsky and Venezuela and Malcolm X and the Service Employees International Union and so, so many more. All of this is why, until recently, I knew almost nothing about the Mexican Zapatista movement except that the excessive number of \”a\”s looked vaguely suspicious to me. It\’s also why I felt compelled to travel thousands of miles to a Zapatista \”organizing school\” in the heart of the Lacandon jungle in southeastern Mexico to try to sort out just what I\’d been missing all these years. 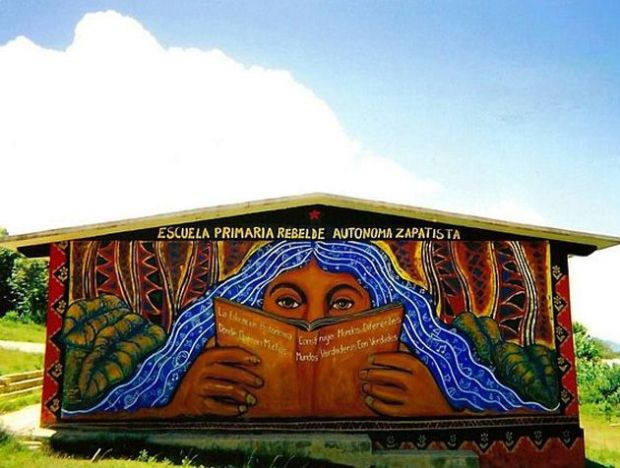 The fog is so thick that the revelers arrive like ghosts. Out of the mist they appear: men sporting wide-brimmed Zapata hats, women encased in the shaggy sheepskin skirts that are still common in the remote villages of Mexico. And then there are the outsiders like myself with our North Face jackets and camera bags, eyes wide with adventure. (\”It\’s like the Mexican Woodstock!\” exclaims a student from the northern city of Tijuana.) The hill is lined with little restaurants selling tamales and arroz con leche and pozol, a ground-corn drink that can rip a foreigner\’s stomach to shreds. There is no alcohol in sight. Sipping coffee as sugary as Alabama sweet tea, I realize that tonight will be my first sober New Year\’s Eve since December 31, 1999, when I climbed into bed with my parents to await the Y2K Millennium bug and mourned that the whole world was going to end before I had even kissed a boy.

Thousands are clustered in this muddy field to mark the 20-year anniversary of January 1, 1994, when an army of impoverished farmers surged out of the jungle and launched the first post-modern revolution. Those forces, known as the Zapatista Army of National Liberation, were the armed wing of a much larger movement of indigenous peoples in the southeastern Mexican state of Chiapas, who were demanding full autonomy from their government and global liberation for all people.

As the news swept across that emerging communication system known as the Internet, the world momentarily held its breath. A popular uprising against government-backed globalization led by an all but forgotten people: it was an event that seemed unthinkable. The Berlin Wall had fallen. The market had triumphed. The treaties had been signed. And yet surging out of the jungles came a movement of people with no market value and the audacity to refuse to disappear.

Now, 20 years later, villagers and sympathetic outsiders are pouring into one of the Zapatistas\’ political centers, known as Oventic, to celebrate the fact that their rebellion has not been wiped out by the wind and exiled from the memory of men.