WASHINGTON — Border Patrol agents have deliberately stepped in the path of cars apparently to justify shooting at the drivers and have fired in frustration at people throwing rocks from the Mexican side of the border, according to an independent review of 67 cases that resulted in 19 deaths. 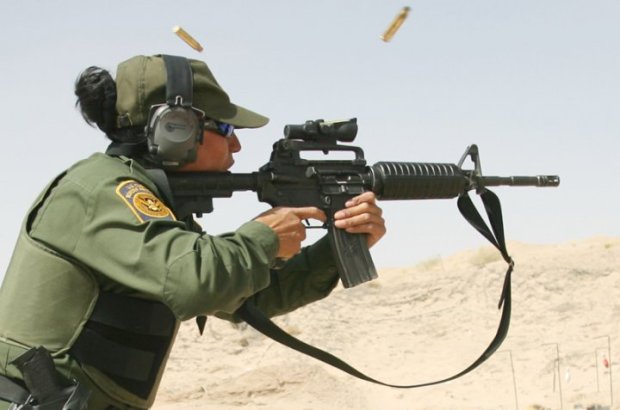 The report by law enforcement experts criticized the Border Patrol for “lack of diligence” in investigating U.S. agents who had fired their weapons. It also said it was unclear whether the agency “consistently and thoroughly reviews” use-of-deadly-force incidents.

U.S. Customs and Border Protection, which had commissioned the review, has tried to prevent the scathing 21-page report from coming to light.

House and Senate oversight committees requested copies last fall but received only a summary that omitted the most controversial findings — that some border agents stood in front of moving vehicles as a pretext to open fire and that agents could have moved away from rock throwers instead of shooting at them.

The Times obtained the full report and the agency’s internal response, which runs 23 pages. The response rejects the two major recommendations: barring border agents from shooting at vehicles unless its occupants are trying to kill them, and barring agents from shooting people who throw things that can’t cause serious physical injury.

The response, marked “Law Enforcement Sensitive,” states that a ban on shooting at rock throwers “could create a more dangerous environment” because many agents operate “in rural or desolate areas, often alone, where concealment, cover and egress is not an option.”

If drug smugglers knew border agents were not allowed to shoot at their vehicles, it argues, more drivers would try to run over agents.

The new secretary of Homeland Security, Jeh Johnson, is “reconsidering the response” to the two recommendations, a Homeland Security official said Wednesday. The official spoke on condition of anonymity to discuss internal deliberations.

Mexican authorities have complained for years that U.S. border agents who kill Mexicans are rarely disciplined and that the results of investigations are not made public for years. Critics warn that more deaths or abuses are inevitable unless stricter rules are imposed to limit use of lethal force.

“There needs to be a level of accountability if you want to change the culture and the pattern,” said Christopher Wilson, an expert on U.S.-Mexico relations at the Woodrow Wilson Center, a think tank in Washington. “People are being killed that don’t need to be killed.”

The review was completed in February 2013 by the Police Executive Research Forum, a nonprofit research and policy organization in Washington that works closely with law enforcement agencies. Experts from the group were allowed to examine internal Border Patrol case files on 67 shooting incidents from January 2010 to October 2012.

The authors said evidence in the case files suggested border agents in some cases stood in the road to shoot at drivers who were trying to avoid arrest and who posed no direct lethal threat to them or others.

“It is suspected that in many vehicle shooting cases, the subject driver was attempting to flee from the agents who intentionally put themselves into the exit path of the vehicle, thereby exposing themselves to additional risk and creating justification for the use of deadly force,” the report reads. In some cases, “passengers were struck by agents’ gunfire.”

“It should be recognized that a half-ounce (200-grain) bullet is unlikely to stop a 4,000-pound moving vehicle, and if the driver … is disabled by a bullet, the vehicle will become a totally unguided threat,” it says. “Obviously, shooting at a moving vehicle can pose a risk to bystanders including other agents.”

The authors recommended training agents “to get out of the way… as opposed to intentionally assuming a position in the path of such vehicles.”

They also recommended that the Border Patrol adopt police policies used in most U.S. jurisdictions, which bar officers from firing at a moving vehicle unless deadly force is being used “by means other than a moving vehicle.”

Border Patrol officials defended the use-of-force policies, arguing that agents needed broad flexibility to protect themselves and the nation’s borders.

“In a lot of cases, Border Patrol agents find themselves in an area where they don’t have communications, they don’t have immediate backup and often don’t have the cover and concealment that urban areas provide when you are dealing with an escalation of force,” Border Patrol Chief Michael J. Fisher said in a telephone interview.

Shawn P. Moran, vice president of the Border Patrol union, said the agency was right to reject restrictions on when agents can shoot.

If smugglers “know we aren’t allowed to defend ourselves, we would see many more rock attacks …[and] assaults where vehicles try to run down agents because they would know there would be no repercussions,” Moran said from San Diego.

A Homeland Security Office of Inspector General report in September found that border agents opened fire on rock throwers 22 times in fiscal year 2012. It did not say how many people were injured by the “rock assaults” or by the gunfire.

In recent congressional hearings, some lawmakers criticized Customs and Border Protection officials for not fully disclosing when border agents are allowed to use deadly force, and what disciplinary actions, if any, had been taken.

“When a young person throws a rock across the border toward the border or border agents, some agents respond with a gun and other agents don’t respond at all. There seems to be some need for some consistency in the response to these incidents and how we treat it,” Sen. Robert Menendez (D-N.J.) said at a Jan. 15 confirmation hearing for Gil Kerlikowske, the Obama administration’s nominee to head Customs and Border Protection.

Kerlikowske, a former Seattle police chief, said he had never served in a law enforcement agency that did not make its use-of-force policies public. He promised to release more information if he is confirmed. His nomination has not yet been brought up for a vote in the Senate.

The internal report does not detail specific shooting incidents. But news accounts have highlighted several deaths.

In the most recent case, a border agent fatally shot Jesus Flores Cruz, 41, on Feb. 18 in a mountainous area east of San Diego after the agent was allegedly hit in the head with a rock. Mexico’s Foreign Ministry said in a statement that it was “deeply concerned” about the incident.

In September 2012, Guillermo Arevalo Pedroza, a 36-year-old construction worker, was shot and killed during a picnic with his family on the Mexican side of the Rio Grande. A Border Patrol agent who fired his gun from a patrol boat said he had been pelted with rocks, officials said.

Mexican authorities denounced the shooting as “unacceptable” and said Pedroza was not trying to cross the border.

A month later, Jose Antonio Elena Rodriguez, 16, was shot and killed near Nogales, Mexico, by a Border Patrol agent who fired through a fence. The autopsy report said Rodriguez was shot eight times in the back. The Border Patrol said the agent, whom it did not identify, was hit with rocks when he responded to reports of drug smugglers climbing the border fence.

“I believe it was excessive use of force,” Luis Parra, a lawyer for the slain teenager’s family, said in a telephone interview from Nogales, Ariz.

Parra said that the FBI had interviewed witnesses and that Mexican prosecutors were in discussions with Justice Department lawyers to give the FBI the bullets that hit Rodriguez, as well as his clothes and emergency dispatch recordings from the shooting. An FBI spokesman said the investigation was ongoing.

Daniel Rothberg in the Washington bureau contributed to this report.