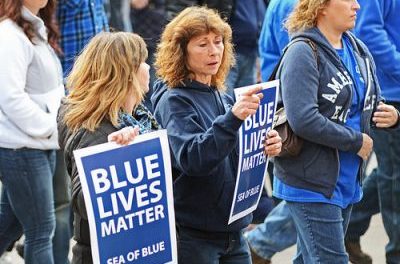 The first night of the Republican National Convention featured a parade of alpha-male veterans and tough-talking cops pledging to “make America safe again.” Marcus Lutrell, a highly decorated Navy SEAL accused of fabricating major portions of his tales of heroism and elan, set the tone for the evening. Recalling the action-packed operations he spearheaded in Afghanistan with a mixture of misty eyed nostalgia and vein-popping outrage, Lutrell concluded that “your war is here.” His insinuation of a new war on terror raging in America’s streets, where duty-bound cops are supposedly besieged by radical Black Lives Matter protesters and black nationalist snipers, transitioned smoothly into an appearance by David Clarke, the hardline Milwaukee County Sheriff who has warned that the Black Lives Matter movement would soon join forces with the Islamic State.

Clarke opened with what was perhaps the most successful applause line of the evening: “Ladies and gentleman, I would like to make one thing very clear: Blue lives matter in America!” Clarke brought RNC delegates to their feet again when he celebrated the acquittal of the Baltimore police officers accused in the death of Freddie Gray, the African-American man who died after sustaining injuries during an arrest, resulting in the severing of 80% of his spine from his neck. When Clarke cast Black Lives Matter and the Occupy movement as agents of anarchy hellbent on destroying an otherwise functional social order, the crowd erupted with euphoric applause.