A group of Native American activists who gathered in Cushing, OK, today were stunned after local authorities forced them into cage, miles away from their destination. The activists were heading to a pro-oil event to protest the Obama administration's move to fast track a segment the Keystone XL pipeline. Below, a press release from the Indigenous Environmental Network.

Native American’s gathering in Cushing, OK today to protest President Obama’s words of praise for the Keystone XL pipeline were forced by local authorities to hold their event in a cage erected in Memorial Park. The protestors were stunned that their community, so long mistreated, would be insulted in such an open manner instead of being given the same freedom of speech expected by all Americans simply for taking a stance consistent with their values. 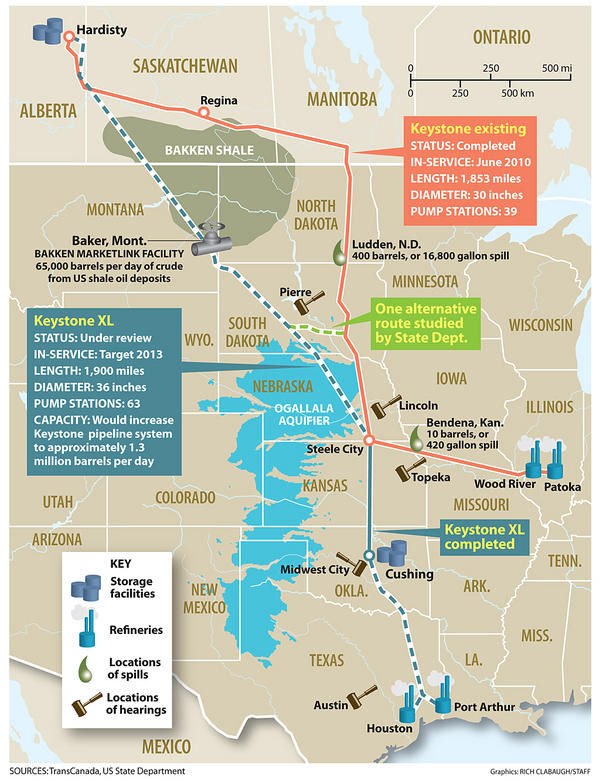 “A lot of tribal councils and Indian businesses struggle to find a balance between economic resources and our inherited responsibilities for the earth,” said Indian actor and activist Richard Ray Whitman in a statement. “How will the decisions we make now effect coming generations?”

“President Obama is an adopted member of the Crow Tribe, so his fast-tracking a project that will desecrate known sacred sites and artifacts is a real betrayal and disappointment for his Native relatives everywhere,” said Marty Cobenais of the Indigenous Environmental Network. “Tar sands is devastating First Nations communities in Canada already and now they want to bring that environmental, health, and social devastation to US tribes.”

The President visited Cushing to stand with executives from TransCanada and throw his support behind a plan to build the southern half of the controversial Keystone XL pipeline to move tar sands bitumen and crude oil from Cushing to the Gulf Coast refineries in Texas.