*Mexikaresitance.com Note: This magazine looks hilarious. Unfortunately, the kids reading it lack the brainpower to see it for the joke that it is...

A magazine called The Conservative Teen, an effort by the out-of-touch right to reach out and touch the nation’s young people, has been a hot topic today on blogs and social media. In case you haven’t heard of it, here’s some of the buzz: Vice.com called it the “Worst Magazine Ever.” Michael Musto of The Village Voice described it as “A new magazine for teens who don’t want to have sex, preferring to spend their time looking down on government help for the poor while reminiscing about Reagan.”

Buzzfeed chose to present its articles without comment. And really, they do speak for themselves:

“How to Draw Obama”

“Why Abstinence Works & How It Can Work for You!”

If you’re thinking this is a “spot the fake headline” gag, we’re sorry to break it to you that they are all real. Even the one about Reagan. 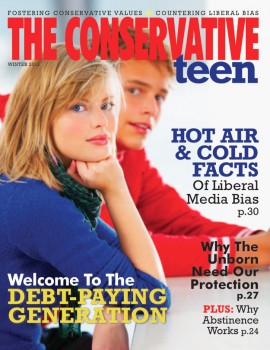 One piece from The Conservative Teen will be of particular interest to Native American readers. Located on page 22, it’s “Government Creates Poverty” by John Stossel, an essay about the Bureau of Indian Affairs that begins with these—to some readers, familiar—lines:

The U.S. government has “helped” no group more than it has “helped” the American Indians. It stuns me when President Obama appears before Indian groups and says things like, “Few have been ignored by Washington for as long as Native Americans.”

Ignored? Are you kidding me?

Stossel’s essay (read it here) is a version of a segment on a show called Freeloaders that aired on Fox News. Its underlying message—that government help is worse than no help at all—is straight out of Ronald Reagan (you know, the first black President) and hardly controversial. But it’s rife with irresponsible language and false equivalencies that ignited a firestorm of outrage in Indian country a year ago (for examples of outrage, search this site for “Stossel”).