The national movement looked local with an Earth Day action that took over a long-disputed tract of land in California's East Bay and turned it into a community farm with two acres of planted crops. Monday morning, activists were removed by force, but they vowed to return. Gopal Dayaneni climbed onto a truck, megaphone in hand, a straw hat shading his face as he spoke to the crowd gathered at the locked gates.

FarmersFarmers, young and old, took the tract on April 22, led by the Brass Liberation Orchestra.

“If you’ve ever planted a seed, if you’ve ever pulled a weed, you are a farmer,” Dayaneni said. “I’m ready to walk through that gate and take back the tract.”

He continued: “Because if it is the right thing to do, then we have every right to do it.” The crowd cheered as the chains on the gates were cut open and hundreds flooded onto the Gill Tract, several acres of University of California (UC) property that have been contested for more than a decade. They brought tools, straw, chickens in portable coops and 15,000 starter plants that had been growing in green houses around Northern California for the past several months before finding their home in this Class I soil in the sleepy bedroom community of Albany, just north of Berkeley. 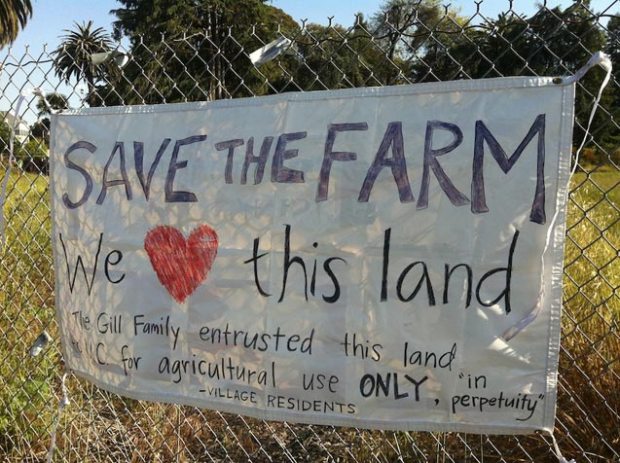 A few months ago, when one activist approached me and whispered, “Save the date, we’re going to plant a garden,” this is not exactly the ending I had expected.

The university contends that the farm has impeded high-stakes agricultural research projects set to begin in mid-May. The farmers contend that the University is placing profits ahead of the community’s interest in this last parcel of high-quality arable land in the developed East Bay. They point to the UC’s plan to develop the tract with a 35,000-plus square foot Whole Foods store and for-profit senior housing center. According to the UC’s proposed master plan, the space where activists’ crops now stand and UC scientists now research would be sodded for youth baseball diamonds and other recreational space.

The Gill Tract farm is unlike what most of the public has come to expect from Occupy: actions meant as protest, sending a message as a part of a broader demonstration against economic, political and societal ills. As it stands, the farm has sent a message about the privatizing of public universities and public land, genetically modified food stuffs, urban farming and food sovereignty.

But this message is secondary to the action. The farm is not only and not really a message – because it is a farm. Occupy has inserted itself into a long and protracted battle between a community and a privatizing public institution. If the University of California is forced back to the bargaining table with the community, Occupy actually stands to win.

FULL ARTICLE: Occupy the Farm Dug In, Dug Up.