Winfield is a nice southern town in Western Alabama. I grew up a few miles away in Jasper, and went to Winfield occasionally to roller skate as a teenager in the 70’s. There was nothing very different about the town, which joined many northwestern areas in a boom of strip-mining of coal during that area, and ultimately suffered along with its cousin towns when coal mines began to shut down in the 80’s.

Today, Winfield has a population of about 4,700 residents and growing. A solar roof has just been installed on the Winfield City library to encourage students and citizens to learn about renewable energy. The annual “Mule Day Festival” is being planned for September and is heralded as one of the largest events of its kind in the State. This small town has 20 churches listed on its website including Seven Baptist (four varieties), four Church of Christ’s, one Catholic, two Methodist, a first Assembly of God, two Church of God’s, and three others. Winfield is a typical southern small town with a church on nearly every corner. 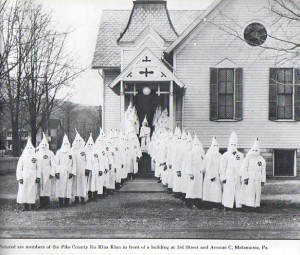 So why has this small Southern town drawn national media attention? A seemingly innocuous flier is to blame. The flier promotes an annual Pastor’s conference to be held on the 4th, 5th and 6th of July. In bold print below the title on the flier is written, “All White Christians Invited.”

The organizer of the event is Rev. William C. Collier, a very scruffy looking character even by small town standards, the pastor a church of God (Christian Identity Ministries). The conference is to be held in neighboring Lamar County.

According to Norris Music manager Tyler Cantrell, who found the flier and brought it to public attention, the fliers were put up during the night without permission of business owners. Cantrell also stated, “”It’s surprising to see something like that in our town…I know it’s been here in the past.”

As for Rev. Collier, he maintains that his church is not a hate group.

“We don’t have the facilities to accommodate other people. We haven’t got any invitations to black, Muslim events. Of course we are not invited to Jewish events and stuff.”