A coalition of civil rights groups, religious leaders and business organizations filed a new request seeking a court order that would prevent authorities from enforcing a rule that requires police to check the immigration status of people they stop for other reasons. 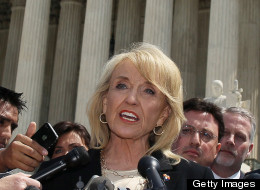 The groups are asking U.S. District Judge Susan Bolton to block enforcement of the requirement before it takes effect, arguing that Latinos in Arizona would face systematic racial profiling and unreasonably long detentions under the contentious section of the 2010 law.

They also say that immigration patrols in recent years by Maricopa County Sheriff Joe Arpaio, the Arizona lawman known for his rigid stance against undocumented immigration, demonstrate that the law’s requirement will disproportionately affect Latinos. Though the requirement hasn’t taken effect, Arpaio said his officers have inquired about people’s immigration status in the past.

In a separate case, the U.S. Justice Department has accused Arpaio’s office in a lawsuit of racially profiling Latinos in immigration patrols. The sheriff denies the allegations. That case goes to trial Thursday in federal court.

Although a different challenge to the Arizona law by the Obama administration succeeded in getting three other parts of the law thrown out by the Supreme Court last month, the administration failed to get the “show me your papers” requirement overturned on its argument that federal law trumps state law. The coalition is seeking to shelve the requirement on other grounds.

Arizona’s law was passed in 2010 amid voter frustration with the state’s role as the busiest illegal entry point into the country. Five states – Alabama, Georgia, Indiana, South Carolina and Utah – have adopted variations on Arizona’s law.