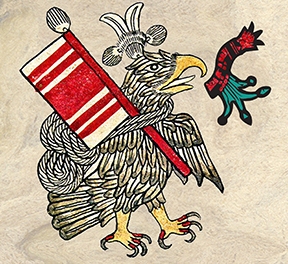 Mexika.org is proud to present a series of articles which serve to articulate the goals and positions of Yankwik Mexikayotl. Please subscribe to our site for more.

Many of you might be wondering what Yankwik Mexikayotl is? What makes it different from traditional Mexikayotl, and why should anyone care enough to look into it? The purpose of this definitional essay is to briefly explain Yankwik Mexikayotl and explore some of its methods, and by the end of this essay, its purpose, intentions, and methodologies should be clear and reasonably explained. Yankwik Mexikayotl is still in the process of emerging, and I expect that it will flourish and continue to evolve as time progresses, so this should not be taken to be the definitive interpretation of this emerging paradigm in Mexika thought.

In effect, the following essay is a primer from which a more focused and concise definition will develop, one that will perhaps become a useful framework of analysis, not only for Yankwik Mexikayotl, but for other similar approaches to traditional indigenous cultures and modern instances of revitalized indigeneity.

We should begin by unpacking a few terms. First, what do we mean by “traditional culture”? Defining this term is not as simple as it may seem, because individual and collective understanding of what “traditional” means must be considered. The ‘scholarship’ (and by this I mean the academic work done on indigenous people and their cultures) has moved away from the gross generalizations of the past. Most contemporary scholars working on indigenous societies take a more nuanced and sophisticated view of those cultures, and the majority agree that trying to define what is or is not “traditional” is a perilous endeavor. With that in mind, let us briefly explore the term traditional, what it means, and who gets to define it?

There are no easy answers to these questions. They form part of larger and ongoing conversations between “Natives and Academics” (to turn a phrase).[1] As I understand it, the main contention with the idea of the “traditional” in indigenous societies is in deciding between two main perspectives, that of “antiquity” or “custom.”

Antiquity is generally understood to mean old and ancient, while custom is usually defined as a thing has been habitually done a certain way for a specific period of time. So the question here is, which of these two supersedes the other? Is it the custom or the antiquity that which makes a cultural trait traditional within any given culture, or is it both simultaneously?

We all have opinions on this. My contention is that a ‘custom’ is the best factor when determining tradition. ‘Traditional’ need not mean that a thing is ancient in order for it to be a legitimate cultural trait. Think of your own lives and families and the many traditions that you have which are particular to your family. I will venture to say that many are not ancient at all, but rather, more recent adoptions that define who you are collectively. That is how it works for larger cultures, which are basically societies of people that share similar ideas, values, language, customs, etc.

The next term we need to discuss is “indigeneity.” If it sounds like an academic construction, that is because it is. In simple terms, ‘indigeneity’ is the combination of the words indigenous and identity – hence, indigeneity. Seems obvious enough, what else is there to say about it? Well, what is indigenous identity? Who defines it; a government, a group of people, an authoritative individual? This term is a little harder to apply because of the long settler-colonial legacy of denying indigenous people their Native ethnicity in North America, particularly in the United States with its blood quantum policies. For our purposes here, we will say that ‘indigeneity’ is an indigenous identity particular to an individual who sees him/herself as belonging to a specific group with roots dating prior to the so-called “great encounter” of 1492.[2] That is an extremely wide net that encompasses a diverse array of peoples, cultures, and societies stretching the northern and southern American continents.

However, ‘indigeneity’ is very distinct, and I tend to think that it only applies to those groups or individuals who actively seek it. It is not a default position for everyone. In this respect, I have always viewed the Mexikah identity in the same light. Being Mexican does not automatically make you Mexikah by default; you become Mexikah during your process of indigenous realization while simultaneously immersing yourself in Mexikayotl. Furthermore, the Mexikah identity is not just a cultural identifier; it is also a politically assertive identity akin to the way the Chicano identity was in its civil rights heady-days of the 1960s-70s. The labels Mexikah and Mexikayotl are inseparable, and in order to better understand the former, we should define the latter. What is Mexikayotl?

Mexikayotl, at its most basic, simply means “‘the essence of being Mexikah,’ or ‘all that is Mexikah.’”[3] Mexikah refers to indigenous ethnicity and not just simply being of Mexican extraction or nationality. It is a way of life and a state of mind. Examples of this include:

…traditional foods, clothing, music, languages, cultures, cosmology, social organization, philosophies…Mexikayotl is an ideological stance, a social movement and a life philosophy all rolled into one. Mexikayotl also includes the traditional ethics and values of our ancestors which shape how we view the world from an Indigenous perspective.[4]

An individual that calls him/herself Mexikah has internalized Mexikayotl, and is engaged in activities congruent with that position in relation to their indigeneity. In my experience, I have found that individuals and/or groups who identify as Mexikah define Mexikayotl according to their own customs and beliefs, but they all share some or all of the elements quoted above.

Now that we have a foundation, we can proceed in explaining Yankwik Mexikayotl. What we are advocating is a paradigm shift within our communities, hence the qualifier “yankwik” (yancuic) which means ‘new’ in Nawatl. Effectively, what we are proposing here is an updated version of Mexikayotl that is responsive to what has transpired over the last five-hundred plus years since the European invasion of the Western hemisphere. Nonetheless, Yankwik Mexikayotl is more than just a response. As Kurly Tlapoyawa has suggested, Yankwik Mexikayotl is a logical evolution of the philosophical and intellectual processes that were already in play prior to Spanish intervention.[5]

Here, you might be asking yourself: “Why do we need a ‘Yankwik Mexikayotl,’ isn’t what we already have enough or all there is”? The answer to that depends on the person being asked. The position forwarded here is that, YES! We need an updated Mexikayotl – a Yankwik Mexikayotl. In an ideal world, Mexikayotl would not need revitalization, its evolution would come naturally over time. The irony is that Mexikayotl has evolved, but it has done so through very questionable means, as Tlapoyawa and Itztli Ehecatl have successfully argued.[6] This questionable evolution will be the subject of future commentary. Our concern here is with a Mexikayotl that is, as Tlapoyawa has put it, “more skeptical and disciplined in our approach to restoring Pre-Kuauhtemok identity and traditions.”[7]

So, how can we go about applying a more disciplined and skeptical approach to Mexikayotl? The following are two starting goals, or articles, we have devised for Yankwik Mexikayotl:

• Article 1.
Promote a strong indigenous identity among Chicano-Mexicanos by reappropriating and defending our pre-Kuauhtemok cultures which are often distorted, maligned, and dismissed as irrelevant by mainstream colonialist society.

• Article 2.
Expose and eliminate the many fabrications and distortions that have infected our movement via Christianity and the Catholic Church, pseudo-history, magical thinking, new age-ism, conspiracy theories, homeopathy, and charlatans from within our own communities.

The first point is a long standing and ongoing goal dating to the first incarnation of this organization – the Mexika Eagle Society, and it is a goal that many within Mexikayotl have advocated for in their own way since the indigeneity bug bit the Chicano/Mexicano community.

The second point is what distinguishes the ‘yankwik’ component in proposition from the Mexikayotl most of us have come to know. In essence, Yankwik Mexikayotl is a rationally driven methodological process which seeks to reform Mexikayotl proper from the various elements that have dishonestly misrepresented, misappropriated, and abused it at the expense of its adherents.

Yankwik Mexikayotl specifically responds to and targets the points laid out in Article 2 by using critical thinking, rational reasoning, skepticism, humanism, and logic. I understand that many folks in the Mexikah community frown upon this approach to tradition and deem it to be “Westernized” or “colonized” thinking, but whom here does not live in the modern world and benefit from its many comforts? Being anti-science and anti-critical thinking is not conducive or progressive to any society.

If our ancestors had not used their intelligence to figure things out —you know, like ‘Western scientists’ do today, would they have developed corn, calendars, buildings, writing systems, and complex societies? I think not. Being a traditional, or ethnic, or an indigenous person does not mean that one has to reject science or progress. Science and its cousin technology are precisely how we humans have progressed —for better or for worse— regardless of where those things originated.

It is due time that we stop vilifying science and technology, simply because they challenge our assumptions and beliefs or because of our disavowal of things European. Yes, our American ancestors suffered immensely at the hands of Europeans, there is no disputing that, but they were also adept at surviving and adopting the strange trinkets the foreigners brought with them. Think of the elaborate and gorgeous bead-work done by many indigenous peoples throughout the Americas. Those glass beads were introduced by Europeans, and they soon replaced the ‘traditional’ material used for jewelry making. Does this sound like outright rejection?

On the contrary, even in the face of uncertainty, indigenous people quickly realized that they could benefit from the ideas, objects, and technologies that Europeans introduced to them. Things like iron tools, beasts of burden, and weapons were easily and promptly assimilated into indigenous societies. Of course, as we all know the exchange went both ways resulting in the global diffusion of American items such as corn, the tomato, the potato, and today’s American favorite, el agaucate – the avocado.

In summary, this essay introduced a more concise understanding of Yankwik Mexikayotl and elaborated a few terms that get tossed around a lot but rarely get defined in the process. It also introduced two major goals and an open-ended definition of Yankwik Mexikayotl. The reason for leaving the definition open is so that it can evolve in concert with the development of the new paradigm we are advocating for within Mexikayotl. I hope our proposal was adequate and that our words did not injure anyone’s personal sensibilities. That is not our intention. The idea here is to initiate a healthy and respectful dialogue that will lead to a more engaging, rational, and forward thinking approach to Mexikayotl. Tiyaweh Mexikah!

About the author:
Tlakatekatl is a long-time Chicano activist, danzante Mexika, and a scholar with a PhD in history. His research explores Chicana & Chicano indigeneity and its deep connections to ethnic Mexican indigenist nationalism. Current projects involve collaborating and producing a podcast that focuses on Chicana / Chicano themes and topics as well as documenting Dallas’ disappearing Chicano murals.
Follow @tlakatekatl

5 Comments on A New Mexikayotl: It’s Time To Purge The Nonsense!