On Monday, March 26th, the indigenous federation FEDIQUEP – the Spanish acronym for the Quechua Indigenous Federation of the Pastaza – demanded that the Regional Government of Loreto comply with agreements it signed last June in the so-called Acta Pastaza, which the Quechua celebrated as a landmark pact on social and environmental issues in a delicate cultural and ecological zone where PlusPetrol profits and pollutes at the expense of the local indigenous people. 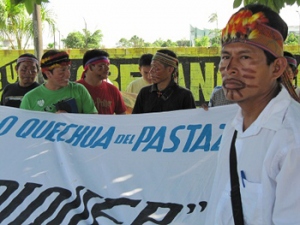 The Act included promises ranging from school construction, additional bilingual teachers, doctors and clinic staff for a remote region where the Peruvian state has little presence and indigenous communities are left to haggle with the PlusPetrol for services in a grossly unfair relationship that breeds dependency and sanctions abuse. The Regional Government also promised a baseline study of the environment and the health of the locals to assess the effects of 40 years of oil activities in the region.