Beer vendors in Whiteclay would be forced to discriminate against residents of a neighboring South Dakota American Indian reservation if a judge agrees with a lawsuit accusing the retailers and others of knowingly contributing to the reservation's alcohol-related problems, attorneys said in asking for the lawsuit to be dismissed.

The argument is among several made in motions filed Friday asking a judge to dismiss the $500 million lawsuit filed by the Oglala Sioux Tribe against some of the world’s largest beer makers, as well as their distributors and the four beer stores in the reservation border town of Whiteclay.

The lawsuit asks that breweries, retailers and distributors pay damages for health care and law enforcement costs, developmental problems in children and other alcohol-related problems on the Pine Ridge Indian Reservation. The tribe also wants a judge to restrict alcohol sales in Whiteclay. 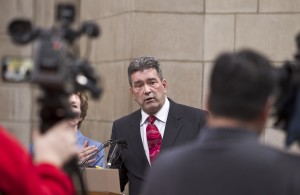 Lawyers for the beer companies said in court papers that such an order would force Whiteclay’s beer stores to discriminate against American Indians from Pine Ridge.

“The absurdity of this request cannot be understated,” said Jerald Rauterkus, an attorney for State Line Liquor in Whiteclay. The tribe “is seeking an order from this court that would actually command retail defendants to refuse the sale of their otherwise publicly available goods to members of the Oglala Sioux Tribe who live on the Pine Ridge Indian Reservation based solely on their race and ethnicity.”

Alcohol officially is banned on Pine Ridge, a reservation with an estimated 40,000 residents that spans an area about the size of Connecticut. Roughly 5,700 residents live in Pine Ridge village, the reservation’s largest town, which sits 2 miles north of Whiteclay.

Whiteclay has a population of 11 people and sold the equivalent of 4.3 million, 12-ounce cans of beer last year. Tribal leaders and activists blame the Whiteclay businesses for chronic alcohol abuse and bootlegging on Pine Ridge.