A prominent human rights body meeting in Geneva is asking questions about the way police in Ontario respond to native land rights protests. This week, Canada makes its regular report before the United Nations Committee against Torture — the independent expert body that oversees the international human rights treaty for the prevention of torture and ill-treatment. The committee has asked Canadian representatives to explain why recommendations that came out of the landmark Ipperwash inquiry into policing and aboriginal protests in Ontario have not been implemented. Standards for police use of force, police accountability and respect for the right to protest are all matters protected in international human rights law.

The report from the high-profile inquiry was issued five years ago this month. The Ontario Provincial Police claims all the recommendations directed at the force have been addressed. And for its part, the provincial government appears satisfied the OPP’s work is done.

Last year, however, Amnesty International published a detailed case study of how the OPP responded to protests over a long-standing, unresolved land claim in the Tyendinaga Mohawk Territory near Belleville. On two occasions, in 2007 and 2008, the OPP mobilized hundreds of officers, including its highest level of response, the Tactics and Rescue Unit, commonly known as the sniper squad. This preparation to use lethal force against Mohawk activists took place despite the fact that no evidence has ever been presented that the protest constituted a serious threat to public safety. 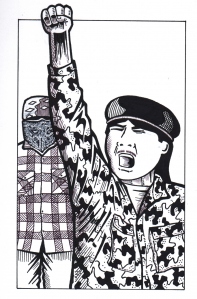 In the April 2008 incident, a confrontation between protesters and police escalated to the point that OPP officers aimed high-powered rifles at unarmed protesters and bystanders. During the subsequent trial of activists charged in connection with the incidents, the trial judge commented on the efforts that many of those arrested had made to prevent tensions with police and non-aboriginal counterprotesters from escalating. In contrast, the judge noted that miscommunication among the OPP, including a broken promise not to arrest protesters escorting elders from the site of the confrontation, had contributed to the situation erupting out of control.

During the trial, questions were raised about whether the OPP had followed its own policies for minimizing the use of force in responding to aboriginal protest. One officer with the Tactics and Rescue Unit acknowledged that he was not very familiar with those policies.

The Ipperwash inquiry was held in response to long-standing concerns over a similar incident in 1995 when a police sniper shot an unarmed protester, Dudley George, after the OPP moved to break up the occupation of Ipperwash Provincial Park. That land has since been returned to the Stony Point First Nation in recognition of its legitimate claim to the land.