Protesters from the Musqueam First Nation blocked traffic on the Arthur Laing Bridge in South Vancouver in an attempt to stop construction at an ancient village and burial site known at the Marpole Midden.

The protest, which began by blocking traffic in both directions shortly after 7 a.m. PT, was expected to wrap up at 9 a.m. 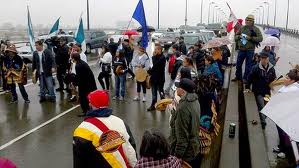 The band launched a series of protests earlier this year after human remains from ancient burials were unearthed at the site on the 1300-block of S.W. Marine Drive in January during the course of archaeological work being undertaken by the developer.

Since then work on the five-storey commercial and residential complex has been stalled and the band is demanding the provincial government step in and approve their offer to exchange another piece of land with the developer for the site.