Ethnic StudiesStudents walk into the Tucson High Magnet School in Tucson, Arizona, on January 4, 2011. Tom Horne, Arizona’s newly elected attorney general, declared the Mexican-American program at the school illegal under a law that went into effect on January 1. (Photo: Jill Torrance / The New York Times)In the year 2006, labor leader, Dolores Huerta, told Tucson high school students that Republicans hate Latinos. While it caused a controversy, Arizona school's then-superintendent, Tom Horne, unleashed what would become a six-year campaign to dismantle Tucson's highly successful Mexican-American studies (MAS) department. In 2010, the anti-ethnic studies bill HB 2281 was signed by Gov. Jan Brewer. In 2012, under threat of the loss of 10 percent of the district's annual budget, Tucson Unified School District dismantled the MAS department. Despite this, the battle is not over as there are a number of legal issues and court cases still to be litigated. In the meantime, much hate has been unleashed, including death threats.

The recent Arizona Republic column (“Race-based studies can’t be justified: Students must be seen as individuals, not as groups,” June 10) by Arizona state Attorney General (AG) Tom Horne – previously the state’s superintendent of public instruction – is nothing short of a masterpiece in the art of obfuscation – by commission and omission. 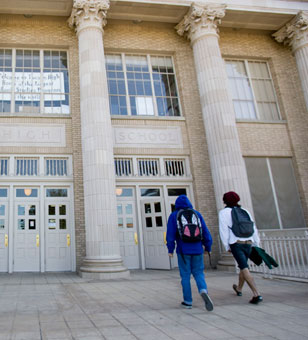 This is especially troublesome because AG Horne was responding to my column (“Demonizing Mexican-American studies is unjust,” Opinions, May 28), which concerns a series of death threats and calls to violence that I, along with students, have received as a result of defending Tucson Unified School District’s (TUSD) Mexican-American studies department.

After receiving the threats against me at my university office phone in May of 2011, I transferred them to my recorder, which I subsequently played at one of the TUSD school board meetings. The threats were so vile that within seconds, the board wanted me to turn off the recorder. I refused because I wanted them to listen to what our community is being subjected to. That resulted in the board cutting off the electricity to the microphone.

In a sense, that’s what Mr. Horne has once again done with his recent column. Rather than denouncing the person issuing death threats against the students and myself, he exhibits indignation at me by changing the topic and calling for me to receive the “Hypocrisy of the Year Award.”

While I would not expect the AG to accept responsibility for the massive amounts of hate that have been unleashed in this state as a result of his role in the attempted destruction of Mexican-American studies, I do expect him, as the state’s top lawman, to unequivocally denounce and fully support the prosecution of those issuing such death threats. Failure to do so appears to absolutely send the wrong message.

He appears to be completely oblivious to the extraordinary amount of hate that has been unleashed in the state subsequent to SB 1070 and other dehumanizing state measures. He cannot but be aware of the many zealots and mentally unstable gun owners in this state who are prone to violence after the Giffords shootings last year.

Additionally, if the AG is given a public forum to attempt to educate the public about Mexican-American studies, then he should have a better command of the topic at hand before exhibiting his limited knowledge, or before writing about incidents or events he did not attend.