A mere 48 hours before the Supreme Court decision on Arizona’s racial profiling law was announced, thousands gathered outside the infamous Tent City jail in Phoenix hoping to turn off its looming vacancy sign forever.

Local activists from Puente Arizona, National Day Laborer Organizing Network (NDLON) and Somos America were joined by Unitarian Universalists who came from around the country. During a powerful candlelight vigil they chanted words of encouragement for detainees listening inside the facility. At a counter rally opposite the vigil, camouflaged border vigilantes brandished guns and shouted angry retorts. 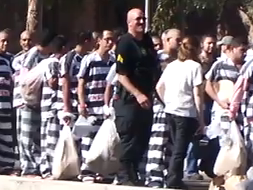 The weekend prior, representatives from the Unitarian Universalist Assembly (UUA) took a tour of the largely canvas facility. Reverend Peter Morales, UUA’s president, said the first thing that struck him was the oppressive wall of heat.

During the summer months, temperatures soar to 140º and reportedly inmates have no access to fans and limited access to water. Sheriff Arpaio, the mastermind behind Tent City, has also boasted of serving rotten food – green bologna is a specialty.

In May, the Department of Justice filed suit against Arpaio for racial profiling and numerous other civil rights violations as a result of a lengthy investigation. Arpaio called the lawsuit politically-motivated, but it is irrefutable that his racially-charged tactics have cost taxpayers millions of dollars in lawsuits.