The latest news coming out of Arizona present a powerful and compelling picture of a broad swath of history-making events associated with the intensifying struggle against the state of siege and partisan violence unleashed by Tea Party and Minutemen-affiliated Republicans against the Mexican-origin communities and other brown peoples in this borderlands state. 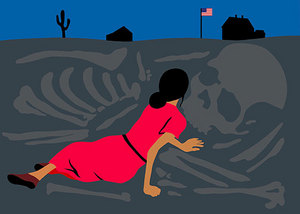 At the head of the breaking news today is the continuation of the trial in the case of Melendres et al. v. Arpaio in Phoenix federal court, with Sheriff Arpaio taking the stand to testify (we will report on this over the weekend). However, it is not just the trial that we should be reporting on. We are especially interested in the unfolding drama centered on the widening grassroots protests against racism and racial profiling in Arizona compelled by the continuing abuses of law enforcement officials who have backed the State’s draconian anti-immigrant law, SB1070, which was largely declared unconstitutional in a June 25 Supreme Court ruling.

According to reports this morning from Democracy Now! and other sources, four undocumented residents of Arizona were arrested on Tuesday after publicly revealing their immigration status outside the discrimination trial of Maricopa County Sheriff Joe Arpaio; video coverage from DN! is featured at the end of this post.

The protesters were there in support of the plaintiffs, who are represented by the American Civil Liberties Union (ALCU), the Mexican American Legal Defense and Educational Fund (MALDEF), and other civil rights groups. The lawsuit alleges that Arpaio has systematically violated the rights of Mexican Americans and other Latina/os by using racial profiling to target them for traffic stops and detention.We reported on the lawsuit and the start of the trial a week ago this past Tuesday (see post of June 17, 2012).

According to DN!, as the trial continued inside the courtroom, the four undocumented protesters unfurled a banner reading “No Papers, No Fear,” before being arrested. In a statement issued to the assembled press, the protesters made this important declaration:

Today, we confront publicly what we risk every day, being arrested by the police, and separated from our families, only because we are undocumented. We’re confronting fear itself. We are undocumented and unafraid.

While much of the media’s attention has focused on the substantive arguments and evidence being presented at Arpaio’s trial, in this post I have chosen to focus more attention on the protests and what these might signify for a clearer understanding of the future of Chicana/o and working-class activism around immigrant rights issues and struggles.

According to the Tucson Citizen, three of the undocumented protesters – Leticia Ramirez (27), Isela Meraz (28), and Natally Cruz, (24) – were nine years old and younger when they first arrived in the United States. A fourth, Miguel Guerra (37) was in his late teens when he arrived in 1994. The young protestors are likely eligible for DREAM Act recognition and a transition to legal resident status with a possible pathway to naturalized citizenship under the terms of a recent Obama Administration Executive Order designed to ease the threat of deportation for persons who were children (minors) upon entry into the U.S., and are non-deportable under circumstances involving crimes other than their undocumented status.