Oscar and Olivia, 10-year-old red-headed twins – his hair cut short, hers long down her back – browse through the shelves at the Forks branch library. They pause to pull out a book that catches their interest and add it to their pile.

It’s dusk. The librarians are pushing chairs back under the tables, getting ready to close for the day. As Oscar and Olivia make their way to the check-out desk, they glance at their mother, Tina, gazing out the window, watching out of habit for border patrol vehicles. 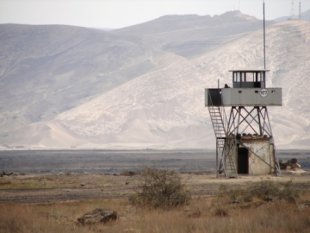 Once a lively logging town on the remote northern Olympic Peninsula of Washington state, Forks has faded into a quiet community of 3,300 people, with modest homes and trailer parks, a grocery store, gas stations and pizza places. The misty air is scented with smoke from wood stoves.

“It’s so neat to live in a small town. All of my family, my support system is here,” says Tina.

Until a couple of years ago, Tina, an American, never gave a thought to immigration, border patrols, detention centers or the possibility of moving to Mexico with her children to keep her family together. Now, it never leaves her thoughts.

Tina knew before she married her husband that he had come to the United States from Mexico to work when he was teenager, without documentation. No one in Forks cared, no one ever asked, and it made no difference to her or her family.

“He is a hard worker, a great husband and loving dad. My family loves him,” says Tina.

But now her husband, 29, has become a prisoner in his own home, leaving only to go to work. Her children live under a constant cloud, afraid they could lose their father at any moment.

Though the community of Forks is 200 miles from the main border-crossing into Canada and 1,300 miles from the U.S.-Mexico border, it has turned into an unlikely battleground between the U.S. Border Patrol and families who have lived here for decades.

The heavily guarded U.S. southern border with Mexico is well known, but most Americans aren’t aware of the dramatically beefed-up Border Patrol presence on the northern border – from Washington state to Maine – where many say racial profiling and human rights violations are routine under the guise of national security.

Nationally, the Border Patrol budget has more tripled in the last decade, from $1 billion in 2000 to $3.5 billion last year.

Since 9/11, the number of Border Patrol agents along the northern border has increased six-fold, from 340 to nearly 2,100. Meanwhile, the number of people apprehended has tumbled – down 78 percent in some areas including Washington, according to the US Border Patrol reports.

Many are questioning the need and the expense of the hugely expanded northern border patrol. Even some agents themselves complain of being under worked.

Too many agents, with too little to do, fill their time following and watching residents in quiet communities, like Forks, that are far from the border.