Vancity announced today that it has divested Enbridge stock from its Socially Responsible Investment funds. The BC credit union is the first financial institution to quit investing in pipelines, but it won’t be the last, a Victoria group promises. 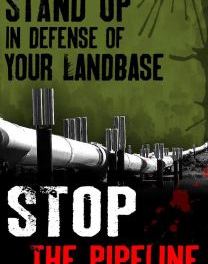 “The pipeline boycotts and blockades are just beginning,” said Zoe Blunt, director of Forest Action Network (FAN). “This should be a wake-up call for any company that thinks it can bulldoze its way across BC.”

In May 2012, FAN challenged Vancouver City Savings Credit Union to live up to its “sustainable investing” label and divest from Enbridge. A spokesperson said Vancity’s board of directors began a review of its holdings after shareholder lobbying failed to persuade the pipeline giant to drop the Northern Gateway proposal. The credit union heard from hundreds of members upset about its investments.

The blockades started months ago. Members of the Unis’tot’en and other clans are refusing access to pipeline surveyors and work crews. On August 6, 2012, FAN delivered a schoolbus full of food, supplies, and activists to a blockade camp hosted by the Unis’tot’en Clan of the Wet’suwet’en First Nation near Houston BC. Over 160 people from as far away as Florida and Illinois spent a week in workshops and training beside a cabin built in the pipelines’ path on the Morice River.

“If boycotts don’t stop the pipes, blockades might,” Blunt notes. Communities all along the pipeline route are organizing against the Enbridge Northern Gateway project and the more imminent Pacific Trail natural gas line, which was approved last April. Enbridge and Pacific Trail share the same route over much of western BC.

In the meantime, Blunt says, “Everyone should tell their bank, credit union, or investment firm to cut their ties to pipeline companies. Tell them why it’s wrong to invest in corporations that destroy watersheds, wildlife, and communities.”