The official 2012 Republican Party platform is a far-right fever dream, a compilation of pouting, posturing and policies to meet just about every demand from the overlapping Religious Right, Tea Party, corporate, and neo-conservative wings of the GOP. If moderates have any influence in today’s Republican Party, you wouldn’t know it by reading the platform. Efforts by a few delegates to insert language favoring civil unions, comprehensive sex education and voting rights for the District of Columbia, for example, were all shot down. Making the rounds of right-wing pre-convention events on Sunday, Rep. Michele Bachmann gushed about the platform’s right-wing tilt, telling fired-up Tea Partiers that “the Tea Party has been all over that platform.”

Given the Republican Party’s hard lurch to the right, which intensified after the election of Barack Obama, the “most conservative ever” platform is not terribly surprising. But it didn’t just happen on its own. Here are some of the people we can thank on the domestic policy front. 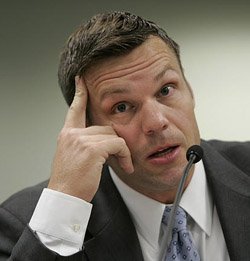 1. Bob McDonnell. As platform committee chair, McDonnell made it clear he was not in the mood for any amendments to the draft language calling for a “Human Life Amendment” to the U.S. Constitution and legal recognition that the “unborn” are covered by the 14th Amendment (“personhood” by another name). McDonnell is in many ways the ideal right-wing governor: he ran as a fiscal conservative and governs like the Religious Right activist he has been since he laid out his own political platform in the guise of a master’s thesis at Pat Robertson’s Regent University.

His thesis argued that feminists and working women were detrimental to the family, and that public policy should favor married couples over “cohabitators, homosexuals, or fornicators.” When running for governor of Virginia, McDonnell disavowed his thesis, but as a state legislator he pushed hard to turn those positions into policy. As the Washington Post noted, “During his 14 years in the General Assembly, McDonnell pursued at least 10 of the policy goals he laid out in that research paper, including abortion restrictions, covenant marriage, school vouchers and tax policies to favor his view of the traditional family. In 2001, he voted against a resolution in support of ending wage discrimination between men and women.” As governor, McDonnell signed the kind of mandatory ultrasound law that is praised in this year’s platform. When his name was floated as a potential V.P. pick, Cecile Richards of Planned Parenthood decried his “deeply troubling record on women’s health.”

ENTIRE ARTICLE HERE: 6 Right-Wing Zealots and the Crazy Ideas Behind the Most Outrageous Republican Platform Ever | Alternet.