The proposed Enbridge and Kinder Morgan bitumen pipelines through BC are finally receiving the attention they deserve – as is the much-needed corollary conversation on the Alberta Tar Sands and their true impact on Canada’s economic future, elevated to national prominence by Official Opposition leader Thomas Mulcair. Yet, as big of a game-changer as oil pipelines and tankers would be for BC, one could argue that the collection of proposed natural gas-related developments on the table is, taken together, at least as transformative for the province’s future – though you wouldn’t know it from the relative silence on the topic. 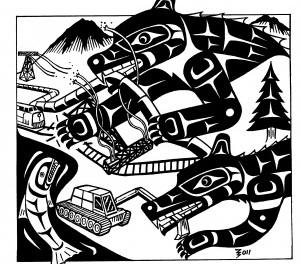 Until recently, that is. The past several months have seen a number of highly significant events related to this matter.

First, in mid-June, Apache Canada announced a massive new shale gas find in the Liard Basin, which stretches from northeast BC into the southeast corner of the Yukon. The Liard play, being touted as the “best shale gas reservoir in North America”, is west of the Horn River basin play, already one of the world’s largest. The find is undoubtedly a game-changer, elevating northeast BC to the world’s mecca for the relatively new, yet highly controversial process for breaking open shale gas formations deep underground, known as “fracking”.

The next big development came the day after Apache’s announcement, when the NDP, led by Energy Critic and likely future Energy Minister John Horgan, came out fully supporting an expanded natural gas industry in Northeast BC, downplaying environmental concerns about fracking. In the same breath, the Official Opposition showed clear support for the Liberal plan to build a number of Liquid Natural Gas (LNG) plants in Kitimat to export the resource to Asia.

The party’s position was solidified last week when the Georgia Straight reported it was fully backing a new pipeline from Summit Lake, north of Prince George – Encana, EOG and Apache Canada’s joint venture Pacific Trails Pipeline – to carry natural gas from northeast BC to three proposed LNG refineries in Kitimat.

Finally, Premier Christy Clark announced a week later that her government will be reclassifying previously dirty natural gas as “clean” – but only when it’s burned to power these proposed LNG plants in Kitimat. The Campbell/Clark Government previously banned the development of new gas-fired electrical plants, putting the emphasis on renewable or so-called “clean” energy alternatives – wind, solar, geothermal, biomass and hydro.

The premise for these new multi-billion dollar LNG plants is to access new markets in Asia which currently pay far more for gas than North American customers. Prices in China, Japan and Korea range up to $17 per thousand cubic feet versus a historic low of two to three dollars in North America today – largely thanks to the glut of natural gas flooding the domestic market as a result of new shale gas plays. The idea is to turn some of BC’s plentiful gas supply into liquid, put it on tankers and ship it to Asia to reap big profits. Without these prices, big finds like Apache’s in the Liard Basin simply don’t make sense to develop.

While the plan looks financially (though certainly not environmentally) promising on the surface, it’s fraught with complications:

1. The process of converting gas to liquid is enormously energy intensive. According to Christy Clark, all the the power from BC Hydro’s proposed new 1,100 Megawatt Site C Dam on the Peace River would be required for just Shell’s one proposed LNG plant in Kitimat. That may have changed, now that these plants are allowed to burn their own cheap gas for power, but, curiously, Site C Dam has not been taken off the table in the wake of that announcement. The otherwise energy self-sufficient BC has nowhere near enough electrical supply to power three new LNG plants and all the new mines the Clark Government is pushing forward.