1. Autumn Two Bulls is the mother of Wakiyan, or Loud Brave Thunder, a young Oglala Lakota protester who was maced by police on August 26 during a march against alcohol sales along the border of the Pine Ridge Indian Reservation. “My son believes in sobriety. One thing he told me was that Crazy Horse, his hero, was a sober warrior. Crazy horse didn’t believe in alcohol and he knew what was coming because he was a spiritual man and he stood up and fought against what was coming.” Wakiyan is ten years old. Days after the protest his vision was still blurry from the mace. 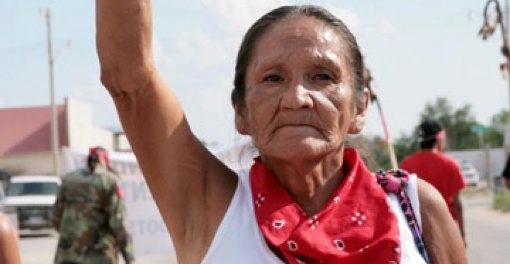 2. Wakiyan takes part in traditional ceremonies, traveling as far away as Wyoming to offer respect to the sacred, to hang prayer flags in the presence of Mato Tipila, or bear lodge, an enormous intrusion of igneous rock that towers over the land like a blunted 1,200 foot buffalo horn. The sacred mountain in the Black Hills is also known as Devil’s Tower in the language of the ones who made wretched war on the Lakota and colonized the region.

3. There are four liquor stores and only fourteen residents in the unincorporated town of White Clay. It exists purely to unload alcohol, and lots of it. On average, the retailers sell 12,500 cans of beer every day, mostly to the reservations 40,000 residents. White Clay is 250 feet from Pine Ridge where alcohol is forbidden.

4. I’ve always only respected and prayed for the “zombies” of White Clay, because some of them are my uncles, my grammas, or my cousins, a new pain hard to see…When I used to live at home, I live in Omaha now, I would drive through White Clay everyday, early in the morning, with a cigarette and a dream, on my way to school, I drove through everyday, with a fleeting moment’s honor, I would honk at them; a small moment of honor, a small song with one drum beat and one sound, a death song perhaps, I would honor them. – Elisha Yellow Thunder

5. There is a green State Highway sign near the hamlet of Wounded Knee, 18 miles northeast of White Clay that lists four possible burial sites of Crazy Horse, the great Lakota warrior. It is believed that his family buried his bones and his heart in the earth beside the creek.

6. Wounded Knee Creek is cut by wind, its behavior a condition of the topography of wind. The surface is evaporated skywards by the sweeping aridity in the summer or frozen by the crystallized gusts of winter. Its waters eventually meander northwest to feed the White River into the isolated grassland mesas and buttes of the Badlands. From there, the blood of Wounded Knee Creek eventually feeds the Missouri, empties into the Mississippi, mixes with silt, agricultural runoff, thousands of other tributaries, and dumps, some 1,400 miles south, into the Gulf of Mexico. The migration of the watersheds of the Lakota nations, which carry the debris of attempted genocide, of struggle and spirit, pass into the warm open ocean, feeding the intensity of hurricanes.